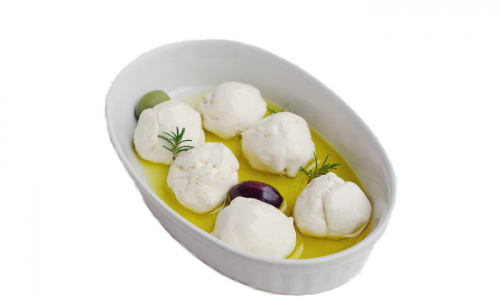 Labneh ( also known as Labne or Labnah) is a soft cheese with a texture similar to cream cheese, an essential part of Middle Eastern cuisine. The taste is like cream cheese with a rich flavor and light texture. It is most often available in the form of small balls dipped in fat or as spread cheese in different packages.

Labneh is produced from strained cow’s milk yogurt, delivering ticker and fuller consistency of the product. Bulgaria is the origin country of Bulgarian yogurt (containing the special Lactobacillus Bulgaricus), a yogurt that is full and thick, with a sour taste and creamy texture, unlike the yogurts produced in other countries. As the Labneh’s main ingredient is strained yogurt, Bulgaria is the ideal place for producing Labneh in its original version and taste qualities. It is rich in beneficial bacteria, vitamins, protein, and calcium which makes it the ideal daily meal for children and adults.

Labneh can be consumed as it is (no added ingredients), mixed with spices, marinated in olive oil and herbs, as well as dried. Most often it can be found fresh in the form of small balls served with olive oil, olives, sun-dried tomatoes, and flatbreads.